Well, we are finally on our way to Birdsville and the Big Red Bash.  We’ve been looking forward to this for some time and are keen to get on the road.

We don’t have too far to drive – we are trying to average about 400km so that we aren’t tiring ourselves out with driving all day.  It’s nice to get somewhere and enjoy the solitude of the camp site and the fire. 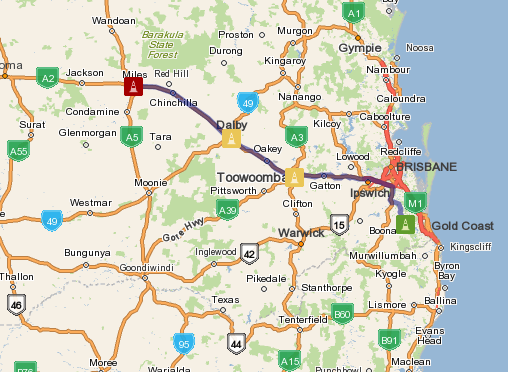 This morning it was overcast  and cool as we left Canungra.  Heading to Toowoomba, where I grew up from about the age of 10, I remember it being a beautiful part of the country particularly at the change of season from Autumn to Winter and then to Spring. Even in winter, Toowoomba has her own beauty with bare trees showing promises of growth in the new buds at the end of the branches. As we drive down Margaret Street from the top of the Range, we are greeted with the ever familiar sign of the avenue of camphor laurel trees that grace the avenue – they remind me of beautiful old ladies who live in a distant era of grace and finery. Every time I see them, I imagine elderly ladies in 1890’s gowns with white gloves and parasols. We pulled up at East Creek Park near the Mothers Memorial for morning tea and entranced some locals with the set up of our Aussie Swag when pulling out our kitchen.

Driving into Dalby brought back a flood of memories for me.  My ex-husband and I lived there for nigh on 20 years and brought up our children there til I left in 2003 when the boys were in early high school.  I remember the countless journeys I made to and from Toowoomba from Dalby – bringing new babies home, school trips, shopping trips, sporting events, eisteddfods, ballet concerts, auditions, swimming training, regional training – and the list goes on.  That highway from Dalby to Toowoomba seemed to get longer every time.  Nothing much has changed in Dalby. The town appears to have had some revival from the recent mining efforts there but we were told over and over by residents from Dalby to Miles that the mining had all but finished.

The towns have grown markedly in the 12 years since I’ve been out this way – seemingly all due to the mining industry.  New restaurants, accommodation, facilities and well known fast food chains appear to have popped up – particularly Chinchilla.  Chinchilla used to boast a main street and not much else – now it’s quite large in comparison and seeing fast food chains was a bit surreal for me.  Though everyone appears to complain about the mining industry, it sure seems to have done a lot of good for these small towns which used to be so isolated and out of the way. They used to survive on agriculture alone and with recent severe droughts their futures were uncertain.  Once the farmers can’t spend money, it really spirals on downwards in towns like these. I’m not going to start a debate on whether or not the mining industry is good or bad – I’m just reporting what I’m seeing now and what I knew when I was living out this way.

At the end of the day, here we sit in our beautiful, quiet free camp at Gil Weir, 6km South of Miles (off Leichhardt Highway), Qld.  We use a mixture of Wikicamps and Camps 7 and we have no trouble finding free camps or close to free.

Wikicamps lists this as dog friendly (always a 1st choice for us), next to a river, as having internet and mobile reception and suitable for camping, camper trailers, caravans and RVs.  There was plenty of space for all who were staying here and it was very idyllic.  I posted a Video Diary of our camp site so see below for that:

So, we warm and happy at our little camp site on our first night away, at peace listening to the crows in the distance and watching the pelicans rest on the tree branches across the river.  Simple eating for us tonight – steak, chips and onions.  What more could you ask for.

We decided that Damian should have his own say on each of these posts, so here’s his first one.

Interesting until we reached the Western Downs then it became flat and boring with vast farms bordering the roads. The roads varied from poor to smooth, though bitumen all the way and only a couple of idiotic drivers.  Travelling mid-week has its advantages!

Fishing is good (though I didn’t get to throw in a line), however the fish are likely to be dirty due to the muddy water.  Condamine River looks healthy however apparent that there’s been recent rain.

Dog friendly and could be time to put the Kayak in. 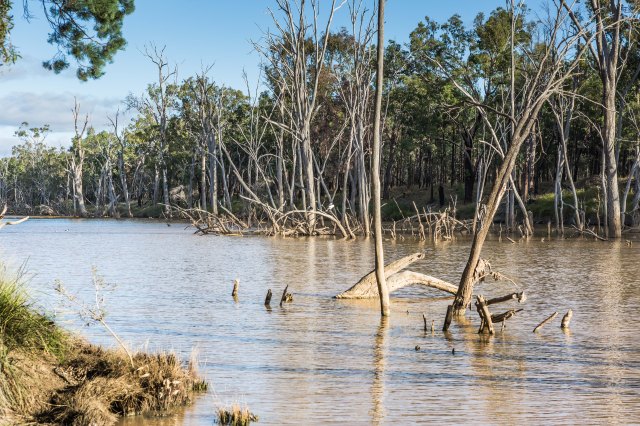 Damian enjoying some musical solitude at the end of the day

Nothing like a camp fire at the end of the day 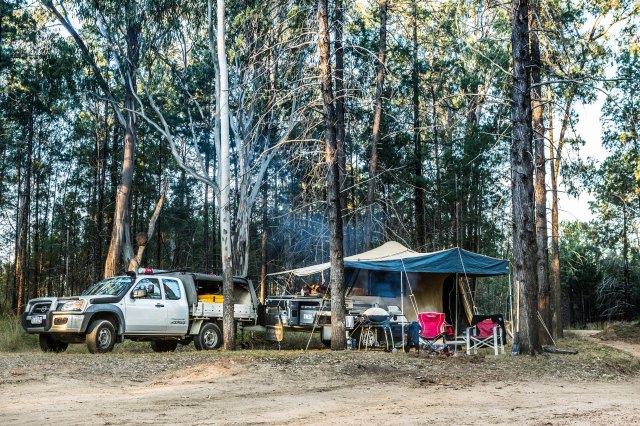 Matilda all set up for the evening

Beautiful sunset light on the river

Join us in our next post, where we travel from Miles to Charleville via Mitchell.