A very warm Sunday morning saw 5 vehicles and their owners congregate at the McDonald’s car park at Coolalinga on 9 October.

Our troopy, AKA The Beast or Bruce (depending on his mood) was having his ‘cherry popped’ and losing his virginity on this trip. We’d only had him a few weeks and thus was looking like a new canvas – virtually untouched with the exception of a bullbar and a new winch. As we are fairly new to the Territory, having only arrived in mid January, we were certainly looking forward to our first trip with the Club and our first trip in Bruce (he was in a good mood that day).

As we waiting for everyone to arrive, we found some shade and chatted. Of course, the discussion turned quickly to who had what vehicle and what mods were on them etc. I am particularly enamoured by the TLCC sticker that Mick & Kim have on their vehicle and am looking to add same to the troopy as soon as I get the chance.

After everyone grabbing take away coffees from Maccas, we were off with Kim in the lead (Mick was navigating and using the radio) and Stephen & Kaye taking the position of tail-end Charlie.

A fairly non-eventful trip to the turn-off (only a little over an hour from recollection), we all stopped to air down (some chose a different way of doing that – but each to his own as long as it gets the job done).

Continuing on, we had wanted to get out and go for a walk to Bird Billabong, til we discovered it was 2hr+ walk – which ended in a very quick decision to forego that until cooler weather.

We continued along the track and pulled over at a billabong on the Mary River. Getting out to stretch our legs, some of us took photos while others chatted. It was a very lovely spot and worth the stop.

Bamboos and bark were in abundance along the trip. Growing in clumps along the rivers and creeks, bamboo lives for approximately 30 years, flowers once then dies. According to documentation, this flowering phenomenon was recorded on the Mary River in 2005.

The track to Hardies Creek was fairly easy providing just a little bit of mud to make things interesting for at least one of our drivers (not going to name names) but his back end certainly swayed around a little a couple of times. 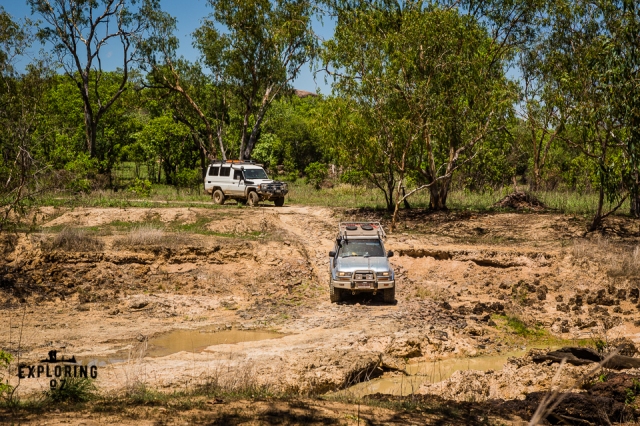 We made for Corroboree Billabong for our stop for lunch and spent a lovely hour or more there chatting. Damian bought the Weber and cooked up most of the meat tray we won that week. 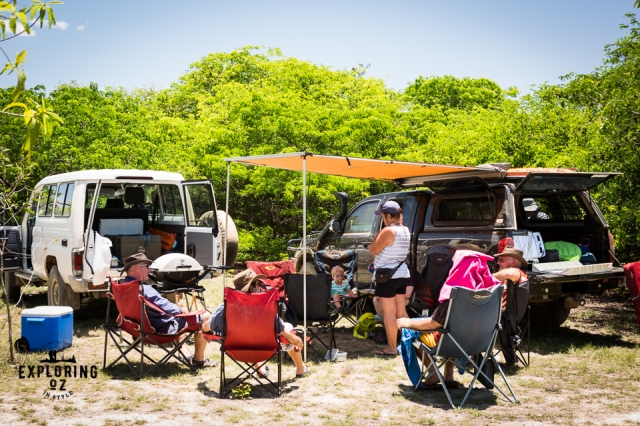 Time to head back and with the vehicles more than a little dirty, decided they needed more dirt and mud. It’s one track in and the same back out so we did the same all over again. Some photos of the return trip: 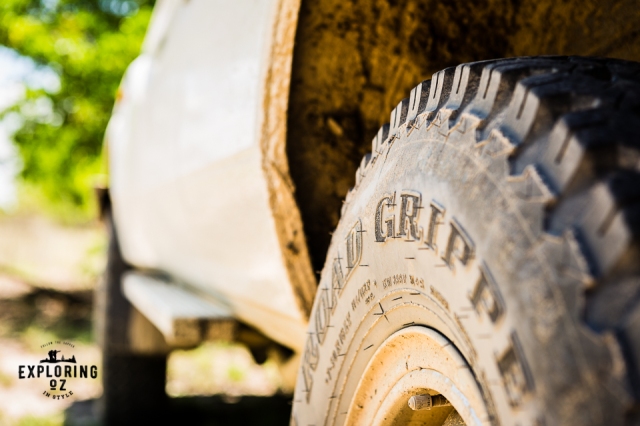 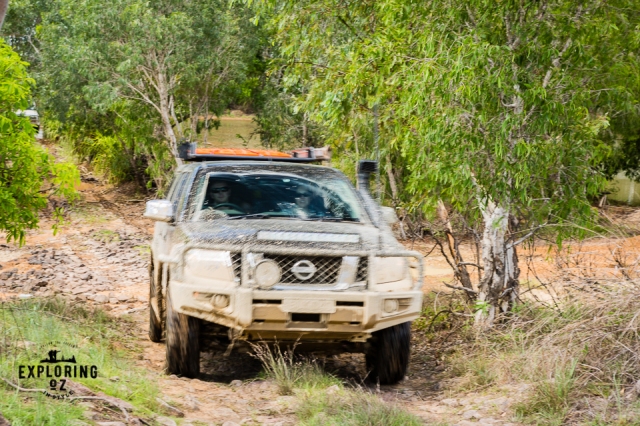 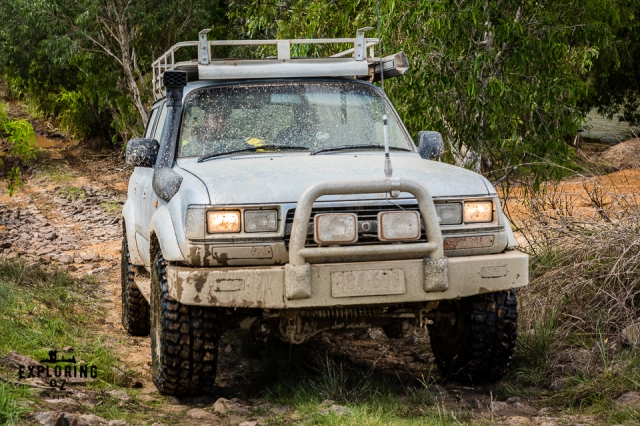 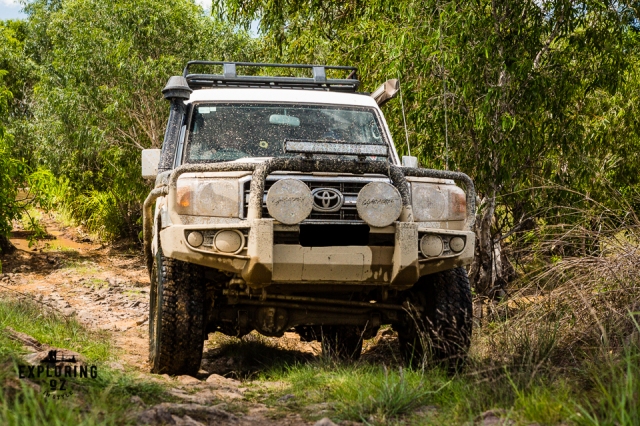 On the way there and back, we had seen this rusted old vehicle on its roof so decided to stop and take a few photos.

One of our party went shopping for some new tools – 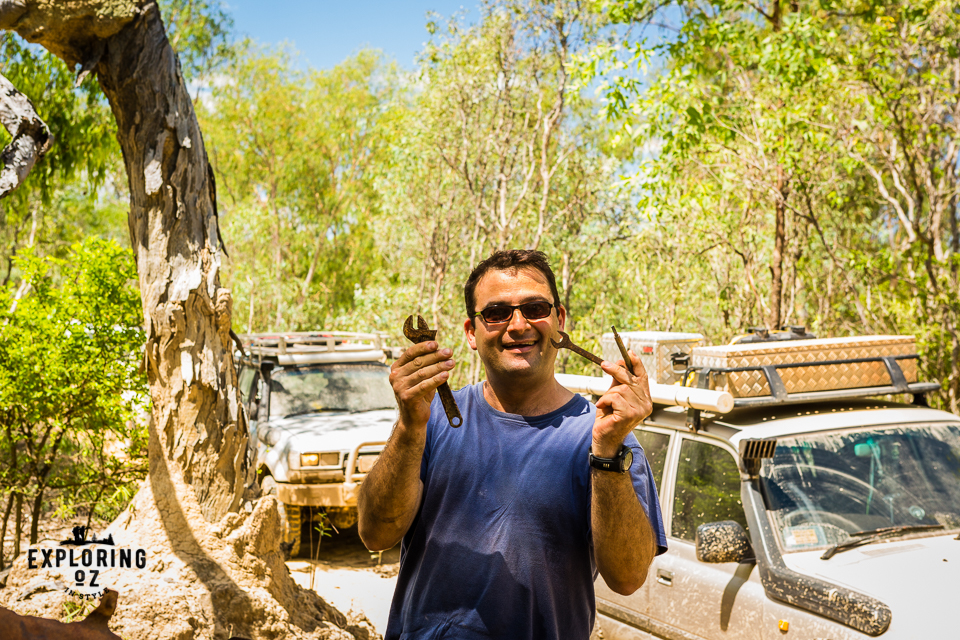 As we left the last real water crossing and hill exit, we decided it was time to hot foot it back to the Corroboree Tavern for a sherbet. 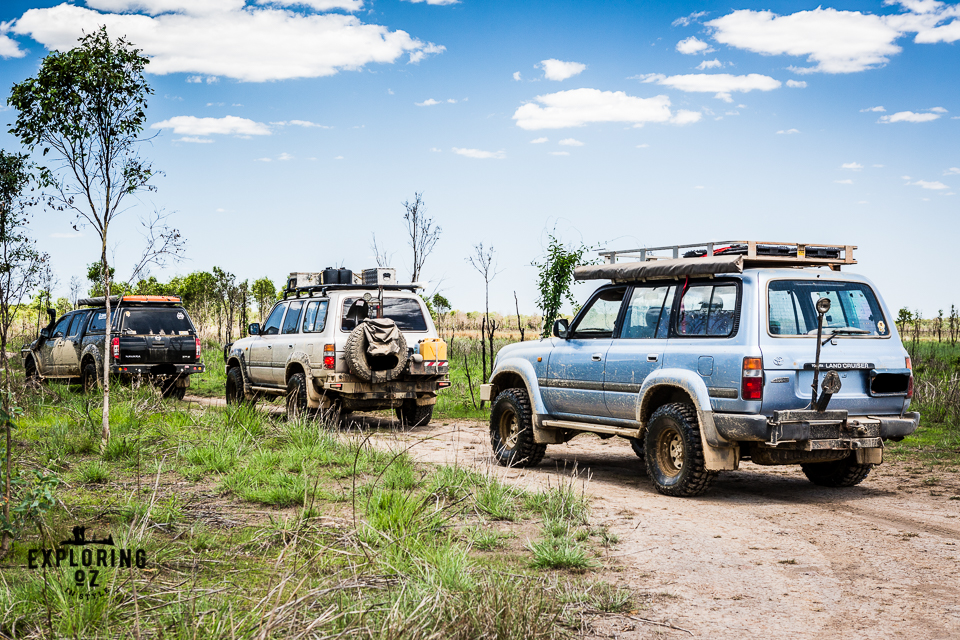 Once there, we all filled our tyres again (Mick appears to have the hang of it this time). 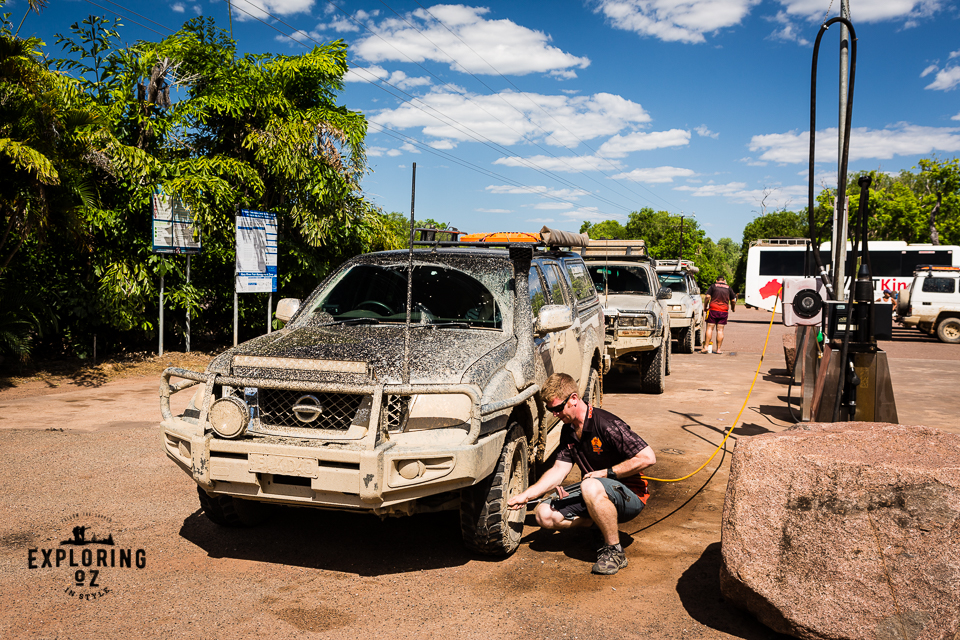 Then we all settled in for a soft drink before we headed home again.

All in all, it was a pretty great day. Damian and I remarked to each other that these types of days are wonderful. It’s certainly easy enough to go by yourself on day trips, but often you have good intentions then decided it’s all too hard. By being in a Club and having trips organised, you’re more likely to head out and we are glad we did. We are so glad we joined the Club – we’ve met some wonderful people and we’ve only been members for a few weeks. Thank you for having us and we look forward to being very involved in the Club over the next few years while we are in Darwin.